reactions to his current album Sparks (2020) of original contemporary folk/folk-rock based in Jewish text/culture:

“A unique blend… brought forth in cleverness, humor and tenderness.” — Nance Pettit, songwriter/artist on Out Beyond Ideas and healing arts practitioner 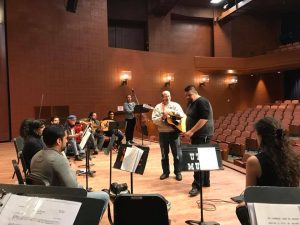 In 2020, Lesser globally launched SPARKS, an ambitious 24-song album of original songs grounded in Jewish text with universal themes, spanning denominations and genres, and was a Finalist at the 2021 New Mexico Music Awards in 4 different categories (including Best Album of the Year), winning for Best Humorous Song!  That latter song also advanced to the Semifinals (top 11%) of a 2021 international contest. Before this effort, Lesser released his singer-songwriter debut album, Afterglow, and also had songs recorded on albums by artists such as Folkus, Sababa, Larry Bach, and Ellen M. Wilson.

Larry has been El Paso-based since 2004 and songs such as “Border Town” show that influence on his muse.  In one of his recent KTEP-FM interviews, Larry played his call for deeper dialogue on gun violence, “What We Carry Now”.  At a major 2018 concert, UTEP’s stellar middle eastern music ensemble premiered Larry’s song “Break”, a peace-seeking culture-bridging song inspired by conversations with a former UTEP colleague who grew up in Ramallah, which was part of a 2022 exhibit at the El Paso Holocaust Museum. Also, Larry played his “Healing Song” at an interfaith panel at UTEP the month of the 2019 El Paso mass shooting, and had his song “The Dogs” in a 2022 El Paso museum exhibit about the experience of 2020.

Larry’s songwriting began in college, then came of age during his grad school years in Austin, where he served as ASG VP, had an album release (yielding his first radio airplay), interviewed a major-label artist, and won song contest awards. Larry has had several songs win contest awards (e.g., 2nd place in the fall 2012 El Paso Songwriting Contest) or published in SingOut!, and Larry has also published poetry.

As Professor Lesser (hey, that rhymes!), Larry is gratefully surprised how his longtime love for song has overlapped with his academic endeavors (HERE’s a lively example) and helped lead to prestigious teaching awards.  On using music/song with teen/adult math/statistics learners, Larry has published pioneering journal articles (and about 170 STEM-related lyrics/poems), won over a dozen awards for songs/videos in recent national contests (e.g., NSF, ASA, MoMath, CAUSE, QL-SIGMAA), given banquet/keynote presentations, was featured guest and lyricist for 6 STEM-themed episodes of a PBS-TV station’s children’s show, had newspaper/TV coverage (especially for “American Pi” and “The Gambler”), and directed a 2015-2020 NSF grant to create and assess interactive songs to help students learn introductory statistics, an effort that includes collaboration with UTEP music faculty (Dousa and Haddad), and has spread to other disciplines (VOICES).

A 2006 visit from songwriting influence David Wilcox (on a cross-country Airstream family journey) sparked Larry’s parallel repertoire of spiritual/Jewish songcraft, aligned with his role for 14 years as Affiliated Faculty in UTEP’s Inter-American Jewish Studies Program. In addition to his SPARKS album mentioned above, his “Healing Song” appears on CDs (by former UTEP instructors), has been used by congregations in several cities, and was featured in an NPR station interview and in the blog of the literary journal of the Center for Bioethics and Humanities at SUNY Upstate Medical University. And he co-wrote a song with (former head of the Women Cantors’ Network) Robbi Sherwin on the debut CD of top-notch contemporary Jewish music group Sababa.